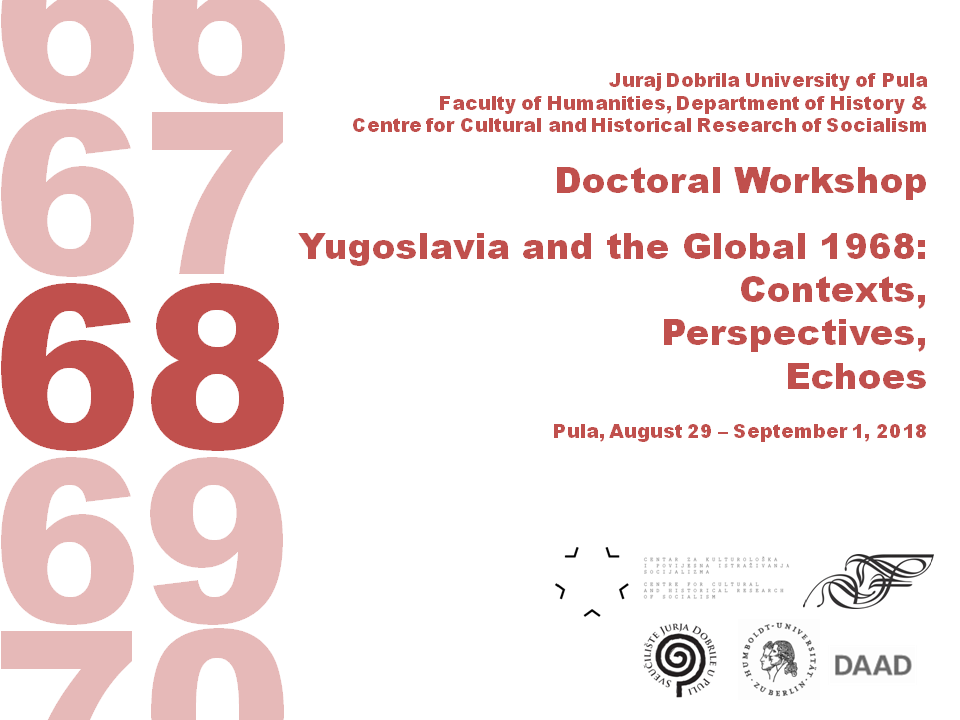 Juraj Dobrila University of Pula, Faculty of Humanities, Department of History &
Centre for Cultural and Historical Research of Socialism

Fourth year in a row we are organising a three-day summer workshop for PhD students. In 2015 the topic was The History of Everyday Life in Socialist Yugoslavia, in 2016 Yugoslav Socialism: Similarities and Exceptionalities, while in 2017 the title was A New Man for the Socialist Society. All workshops were organised within the project Making of the Socialist Man. Croatian Society and the Ideology of Yugoslav Socialism (led by Dr. Igor Duda, Juraj Dobrila University of Pula, supported by HRZZ), while the first two workshops were also a part of the multilateral cooperation initiated from Berlin. This year we are cooperating with the project Anniversary Year 2018 in the Historical and Societal Debate in the Post-Yugoslav Area (led by Professor Dr. Hannes Grandits, Humboldt University of Berlin, supported by DAAD), thanks to which scholars from the universities and institutes in Belgrade, Berlin, Koper, Sarajevo, Skopje, Zagreb and Pula will be able to participate in the workshop, while some will also deliver lectures. In recent years there was an excellent response by applicants, so apart from the above mentioned cities the workshop gathered participants from Florence, Giessen, Glasgow, Graz, Hamburg, Iaşi, Munich, Nottingham, Paris, Potsdam, Regensburg and Sofia.

As a part of the project, whose focus is on historical and societal debates about important jubilees, the semicentennial of student protests in Yugoslavia offers a possibility for the review of origins and consequences of 1968 in Yugoslav and global context. The events of turbulent student 1968 had transnational character, which in Yugoslavia manifested in incorporation of elements both from the East and West, as well as from the Third-World countries. The questions of internationalism, solidarity, youth (counter)culture, the (New) Left, gender and sexuality, and radical art, all found its expression in Yugoslavia, sometimes as a reaction on international tendencies, or as a reflection of long-term changes in the Yugoslav society. The goal of the workshop is to underline the complexity of global processes of the 1968 phenomenon, but also to comprehend the sixties as a crucial decade for transformation of the Yugoslav society on all levels: ideological and political, economic and social, cultural and everyday level. Therefore, we are also interested in the consequences of the sixties in the upcoming decades, as well as placing Yugoslavia in European and global context, particularly welcoming multidisciplinary and comparative approach.

We thank for support
Faculty of Humanities, Pula